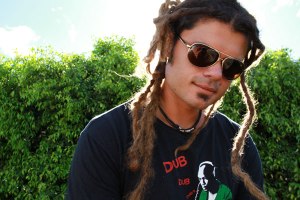 Ash Grunwald is one busy man. Speaking from the Bathurst stop on his current Australian tour, Grunwald had just returned from a whirlwind tour of Canada, which was fresh off the heels of the Gargantua album tour with Scott Owen and Andy Strachan from The Living End.

“Canada was fun, but it was a pretty epic journey,” Grunwald said.
“I think this time around I played 16 shows in 18 or 19 days, which doesn’t leave a lot of free time, as you can imagine when you’re driving between shows.
“I always tour around British Columbia and Alberta, on the Vancouver side of Canada, and seriously, I do more driving there than I ever do in Australia.”

Despite his hectic schedule, there were a couple of opportunities for surf and snow fan Grunwald.
“Of course it was winter over there, which makes for some pretty hairy driving on mountains in the snow,” he said.
“I got to actually go snowboarding twice on this trip.
“But there were a couple of times the van broke down and I had to call the next venue and tell them, ‘Sorry, I’m just out bombing some avalanches…’ haha, or broken down on the side of the road, you know, ‘Oh, I’m going to be about six hours later than expected…’.
“It was definitely challenging, but it was a lot fun.”

Known for his laid back attitude, Grunwald said the opportunity to play with Owen and Strachan on Gargantua had helped him improve as a musician.
“I spent most of the last year playing with the boys,” he said.
“They are amazing musicians, absolutely phenomenal.
“Obviously, they are used to playing with Chris Cheney, who is an incredible musician also, and very professional in his approach… which I probably am not, so much.
“So I think working with them was actually really good for my playing… you never know what you pick up by osmosis, you know?”

The trio’s version of Gnarls Barkley’s Crazy landed on commercial radio playlists across the country, something Grunwald, who plays a lot of covers, had never expected.
“Having that playlisted was a great compliment to our interpretation of the song,” he said.
“I love playing covers, in fact I was just thinking the other day about some more tracks I’d like to cover.
“I think it’s a really good way to introduce your music to people that may not otherwise pick it up… I know when I see a cover of a song I like by a new artist, I’ll go ahead and listen to their originals if I like how they’ve interpreted something I already know.”

Grunwald has added a new element to his repertoire since going back on the road solo: he now plays the harmonica.
“My heroes – who I met at Port Fairy, actually – are Chris Wilson and Ian Collard, and they are both incredible harp players.
“I think many people who are influenced by folk music will strap on a little harp and squawk away quite happily, but I never wanted to do that, I want it to sound as good as the guitar, which I’ve been playing for 27 years now.
“I’ve been playing the harp for… oh, about six weeks?
“I think its helped me fall back in love with playing in a different way… you’ve gotta keep a beginner’s mind, to make things more vital – I think that’s the secret to life, honestly.”

For a while, Grunwald was dropping dub step into his sets.
“I’ve totally gotten rid of that side, now,” he laughed.
“To me, dub step has these slow, evil sounding riffs, which is really what I try to do – evil riffology – so when dub step came along I got really excited about it, because it was basically an electronic version of my music.
“I loved blending the beats, I was up there with my iPad and all this technology having a grand old time, but I think some of the audience thought it was incongruous to see a blues player with all of this technology, so I’ve put the techie nerd side away and stripped it back to 100 per cent organic and I’m loving it, to tell you the truth.”

An APRA winner, Grunwald has been nominated for a Best Blues & Roots ARIA for virtually every album he has released, without taking home the gong.
“I think it’s funny, actually,” he laughed.
“A band called The Audreys has won two or three, I think, John Butler has probably won a couple… there are always so many amazing acts in that category you can never really expect to win, it’s a huge honour just to be nominated, as cheesy as that sounds.
“The irony is I named my daughter Aria, so in a way I already have one.
“I loved the name, and thought people would probably joke about it but we decided to go ahead and name her that anyway… definitely better than any award.”

Grunwald said he enjoyed time at home with his wife and daughters, which he had only gotten to do for a couple of days in the past few weeks.
“We live in a really beautiful place, north of Byron,” he said.
“We have chooks in the back yard, we grow our own veggies, I grow really hot chillies that I make my own chilli oil from… I’m really blessed to be able to tour, but nothing beats going home.
“We’re really close to the airport, too, so I can be on tour and get back to my paradise quickly.”

There is no extended break on the horizon for Grunwald, however.
“I will probably write and record something new this year sometime,” he said.
“I’ve got something really good happening in the US with a good friend of mine who is a big blues and roots musician that’ll probably take around six weeks out of the year, but I don’t think I can tell you what that is today… it’s exciting, though!”

Ash Grunwald is currently on tour around Australia. For more information and tickets, visit his official web site.