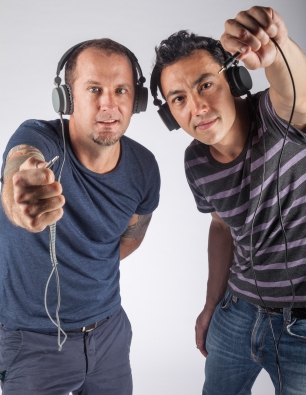 Big news in Aus music this month was Regurgitator pulling out of a show at Canberra’s ANU Bar.

You can read more about that here, but it wasn’t a massive surprise coming from a band with a reputation for being a little outside the box and always sticking up for their creative, artistic and moral beliefs.

Founding member Ben Ely, now in his 40s, acknowledged the band’s non-conformity when we caught up last week.

“When we released the F.S.O. single off our first record, there was 20 minutes of just noise, then the song, then another 20 minutes of noise,” he said.
“So basically you had to listen to all this ambient noise before you could hear the song… I think 10,000 people bought that single when we released it and we got something like 9,000 returns.
“We used to fuck with people like that, which was fun I guess… I guess we still kind of do.”

Ben laughed as he recalled another sonic experiment he and bandmate Quan Yeomans unleashed on unsuspecting fans several years ago.
“We used to do this thing called the Pillowhead Orchestra, which you can find as a B-side on the Pretty Girls Swear single,” he started.
“We would put pillowcases on our heads and play synth and all just make noise while we couldn’t see what we were doing. I remember we played a sold out show at the Gaelic Club in Sydney, there were about 1,200 people there. We played the show and then we came back out and did the Pillowhead Orchestra thing.

“We played for about an hour, we got really into it, had a ball… then we took the pillowcases off our heads and there were like two guys standing there looking at us, everyone else had just walked out.”

Ely admitted when he and Yeomans get together even now, shit gets weird.
“You know how sometimes you’ve got these friends, and when you get together with them you’ll be switched on in a particular way?” he said.
“Well, when Quan and I hang out we seem to inspire this juvenile quality in each other; we revert back to being four-year old boys. It’s the kind of thing we like about our band and our friendship.”

As a result of this, Ely said he and Yeomans had penned a “naughty kids punk rock record” that they were looking forward to recording perhaps more than a new Regurgitator album (which they have already written as well).

“Quan has always liked to play with naughty lyrics and swear words in a pop music format, like Blubber Boy and Suck and all those songs. The kids record is just funny little skits, all G-rated obviously; kind of a Monty Python style thing,” he said.
“I think it’s the only true collaboration between he and I, where we actually wrote the whole thing together. I kinda want to do it more than a Regurgitator album, to be honest, because it’s quite funny.

An album for kids was a natural extension of parenthood, according to Ely:
“We’ve both got kids, mine are a bit older now but we’ve both been doing the dad thing and you know, when you’ve got kids you write music for them and write music with them, and I think this started as an extension of that.”

Being in a successful band for a quarter of a century didn’t really win Ely any cool dad points until earlier this year, though.
“My kids are 13 and 15 now, and I guess they’ve always thought of me as a bit of a dag,” he said.
“We played a free concert at the GOMA celebrating their 10th anniversary, and my eldest daughter was standing around kind of staring at the floor, so I said, ‘Why don’t you come and sit on the stage? Bring your friends,’.

“So she brought her friend over and we started the show with this big rock thing, then our computer broke so we couldn’t do any hip hop or pop songs so we did this punk rock set; the crowd was going nuts, the stage was getting broken, it was nuts.
“I asked my daughter afterwards what she thought and she was like, ‘That was so crazy, I didn’t know you did this, I didn’t know things would get broken!’.”

Ely said his daughter played guitar and wrote songs herself, and had participated in the Girls Rock summer camp program run by his friend, Ash, but he wasn’t sure if she would follow his footsteps into the music industry.
“I’d like to support her whatever she does,” he said.
“I had it really tough growing up; my parents were really against me being in a band, my dad didn’t speak to me for like 10 years cos I wanted to do it.
“I didn’t really have a very open line of communication with my folks, so I try to talk to her all the time and let her know that whatever she decides to do is fine… I think the songs she writes are really good, though… she won’t let me teach her anything!”

It was Ely’s mother’s illness over the past few years that led him to move back to Brisbane at the start of last year.
“Mum passed away, and I had been staying and looking after her for months at a time when she was sick,” he said.
“I saw there were a lot of good things going on, I was really enjoying the weather, and eventually I went back to Melbourne and it was freezing cold and pretty miserable and decided that was it.
“It has changed a lot since the ‘90s, but driving around I see a lot of places that remind me of things that happened in the early days when the band was starting.”

The Queensland weather turned sour last month, however, with Cyclone Debbie tracking wind, torrential downpours and flooding along the east coast. Regurgitator will headline a fundraising gig in Lismore on June 17th to assist victims of the flooding there.
“That whole thing was freakish,” Ely said.
“You get no rain for so long, then all of a sudden the wind picks up and you get more rain in an hour than you’ve seen in three months.
“My driveway got a bit of water but I swept it out and it was fine, I was a bit worried about my car floating away for a while there though.”

Ely said he and Yeomans, along with drummer of 18 years, Peter Kostic, were looking forward to their next run of shows in Queensland and Lismore.
“When we used to do it a lot, like 280 days a year, it used to drive us a bit crazy I think,” he said.
“Now the shows are few and far between, so we can get together and enjoy each other’s company and have fun again. I think mostly we’re flattered and grateful that we have people buying tickets and coming to our shows; it really trips us out that we’re still doing this… it all started as a side project, we never really intended to be a band.”

Ely said despite Yeomans’ frequent declarations to the contrary, he expected they would never stop playing music.

“I was watching that Recovery DVD the other day, and I thought we seemed really green and young and really didn’t seem very confident… I honestly think when we were really popular we weren’t that good as a band.

“I think a lot of young people are getting into the pop music world now and being pushed forward as best they can be, but I’d love to see a shift where all the pop superstars are like 80 years old because I think we all get better with age and experience, even Paul Kelly gets better all the time.

“Quan has said about eight times now that’s it for Regurgitator but then he comes up with more material or a new idea… I think he gets sick of it but then he gets bored… so we’ll be doing this til we’re 80, for sure.”