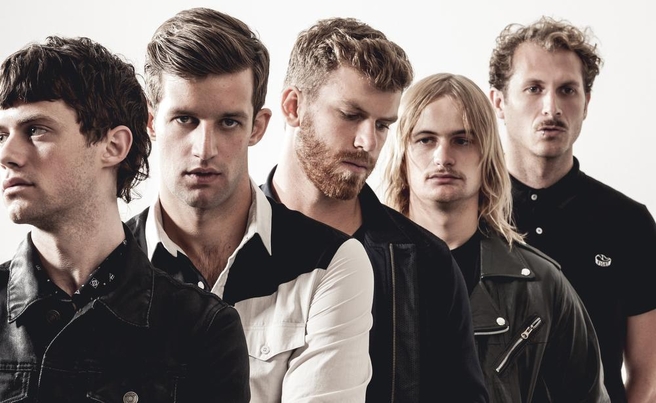 In the days leading up to Christmas, at the end of what has been one hell of a year for The Rubens, Girl caught up with keyboardist Elliot Margin to chat about family, music, and what’s in store for the band that beat Kendrick Lamar to number one in Triple J’s Hottest 100 countdown 2016.

Hi Elliot! What’s been happening? Catch me up!
“Not a lot really, we’ve just finished playing the Corona tour, playing shows all around the country.”

How was that?
“It was awesome, it was sick. Playing a lot of small pubs, five shows a weekend, which was at times gruelling but fun, as well.”

Were they all close together? I know Australia is pretty spread out which makes it hard to tour sometimes.
“Well some of the pubs were literally down the road from each other, especially in Sydney, there was quite a lot of shows but all of them pretty close to each other… but all of them were packed out, which was nice.”

Well they were free shows, weren’t they?
“Yeah exactly. Well I’d turn up to it even if I hated the band.”

So what else has been going on?
“Not much really, we’re back home and preparing for Falls over new years, and then these (North Queensland) shows.”

Fantastic! So have you gotten all your Christmas shopping done?
“I literally walked in the door maybe an hour ago, finished, all done. I feel pretty good about it. What about you?”

So good! So, are you looking forward to bringing in the new year at Falls?
“Yeah, I can’t wait, it’s gonna be awesome.”

Are there any acts on the bill that you’re particularly looking forward to seeing?
“Ah yeah I really wanna see Pond, Pond are always amazing, I haven’t seen them in a while, and I think, well, the thing is as well is obviously because we’re playing each day of the festival – like, Marion Bay then Lorne then Byron Bay – we’re going to pretty much have to finish and then pack up and leave, we’re not going to have a huge amount of time to see bands, which is annoying. But I know that some of the days we play maybe right after Pond or right before Pond, I’m not sure, so that’ll be good, we know we’re going to see them.

Haha that’s great. Now, last Australia Day obviously was pretty epic for you guys, are you looking forward to spending this Australia Day in North Queensland?
“Oh I can’t wait, yeah! I mean, it’s nice to be doing something to have an excuse to play around Australia and have some fun. And yeah, we haven’t been up there in… actually, I don’t think we’ve been there ever… we’ve been up to certain places like Townsville and stuff, but yeah, it’s gonna be awesome.”

Last time you were here was with Groovin?
“Yeah… yes, that was amazing. So good, we’d never done it before but we’d had friends who’d done it and they’d raved about it so we were super excited and yeah, it lived up to it’s reputation, it was nice..”

Well that’s good to hear! So, growing up in a fairly regional area – I know you’re fairly close to Sydney but far enough away – do you like getting out to centres that are outside the metro cities?
“Yeah, it’s awesome. I think it’s a good thing that Groovin does, getting bands out there, because obviously a lot of those fans don’t get to see their favourite bands all that often, otherwise they have to travel to the city, and I think you can tell when you play those shows, people are just so excited and so up for it. They’re so into it, it makes the show you put on even better because you feed off that energy.”

So have you had any crazy fan experiences?
“Ahhhh, I dunno. Our friends tend to be not too crazy, ahhh no stories come to mind… I guess our fans are kind of normal?”

Well The Rubens has had some pretty straight up success with the first two albums. Was that, I guess, expected?
“No, no way. I mean, you sit down to write an album and record an album and you kind of lose track of what it’s for, or lose any kind of expectation of what you expect from it, and then yeah, then you put it out and you realise, ‘oh, wait, now people will get to listen to it and see what they think,’ and yeah we know how lucky we are to have a devoted fan base and people who actually are engaged in what we’re doing, it’s pretty amazing, we consider ourselves lucky.”

So how did you guys come to sign with the label, particularly when you hadn’t done many tours or a lot of EPs like the typical ‘ten year hard slog’?
“I think we were pretty lucky in that we played… I think we played like 15 shows before we were about to go overseas and record our album. See the thing is we didn’t have a lot of traction, we were playing a lot of shows around Sydney and then a friend of ours who did a writing seminar with David Khan, who’s a producer we ended up working with… he showed our demos to David – and still no one knew who we were – and then David said he wanted to work with us, so we knew that was happening, and as we were about to leave, like a couple of weeks before, we got played on Triple J and the track… I think it was Lay It Down… started getting some traction, and then I guess labels started to take interest. As that happened, you know, we were about to go overseas to record this album, and I think that might have made labels take even more interest, like, ‘oh, shit, we might have to jump on this before someone else does,’ So I think we’re pretty lucky in that things kind of just came together and a lot of good things happened at the same time, everything was timed pretty well for us I think really – we only played 15 shows before we were in New York recording our first album.”

That’s pretty crazy! So obviously though, you’ve got your brothers in the band so you’ve been “together” a long time. Did you come from a musical family? Is it something that’s been instilled in you growing up?
“We’re not like… I mean, as kids we were encouraged to learn instruments but it wasn’t something that we were forced into. I mean, when I was younger I got piano lessons maybe for a couple of months as a kid and I hated it and gave it up. Then when I was in high school I was like, ‘well actually, I should try that again.’ So I tried it again and then it was something I just wanted to do like as a hobby. I mean, we always listened to music growing up but it was never sing-alongs around the piano or anything like that, we’re not like the Von Trapps or whatever. It was a pretty laid-back house musically, really, but I dunno, we kind of just fell into it.”

So your parents don’t play any instruments or sing in bands or anything?
“Oh Mum played piano, but that’s about it really. Dad’s got rhythm but he doesn’t play anything so… I’m sure he can sing, I just haven’t heard him sing.”

Has there been much sibling rivalry growing up, and particularly now that you’re in a band together?
“We’re pretty lucky in that we all get along. Like, we’re a big family too, there’s three of us in the band and then there’s three younger siblings as well, so we’re a bit of a troupe, there’s a lot of us. I think if we didn’t get along it’d be a pretty hard life for our parents. I think we probably learnt at a young age that it’s easier just to try and fight less and get along and make it easier for everyone. I think in the band as well it’s nice to have Scotty and Will to break up that family vibe so it doesn’t feel too claustrophobic.”

Yeah for sure. So I guess then the question has to be asked – who’s the biggest pain in the arse in the band?
“Woah… Ooh, that’s a tough one. I dunno… I mean, everyone’s got their quirks… Ehhh… Haha I’d say Clint, the tour manager, and hope that he reads this and that he feels really hurt haha.”

Well back on track haha Hoops has been out for a while now, in the USA and UK as well. So have you guys got plans to tour more overseas after this?
“No, not after this, we’ll pretty much go straight into writing album number three. So we went over to the US and the UK maybe mid-way through the year, and towards the start of the year we did some touring, playing with The Naked and Famous in America and then did some shows in the UK. So yeah, I think we’re getting to the end of this cycle. We’ll get into writing the new album next, which will be exciting.”

Have you got much written for it already? Or do you kind of just sit down, write, then record?
“We’ve got a bunch of demos floating around at the moment, which is fun. Any time we have time off really, we’ll be writing new music or whatever. If we’ve got a spark we’ll sit down and try to get that done, so that when this cycle is over you’ve already got a bunch of material ready to go and get into the studio. So that’s pretty much what we’re sitting on at the moment, and then just compiling it all together, and then next year that’s what’ll be for us I think, recording.”

Haha. Well lastly, I noticed your Unearthed page still lists you as a four-piece band. So when and how did William join the fray?
“Ahh he actually joined before we went to New York. So that’d be the lineup from those first 15 shows. Then Will, he grew up in the same town as us, he was friends with the guy who put us in touch with David Khan. His name was Dean Tuza, our music engineer. So he was friends with Dean, and he decided to come over to New York and just see the album being made and just hang out… mainly to get over his fear of flying, cos he had a huge fear of flying so he thought he might as well do it that was and see what happens. So he ended up over there and we were recording and we realised we needed someone to play bass, and Will plays guitar and bass, he’s a talented dude. So we were like, ‘hey Will, why don’t you sit in on this?’ and he did, then we got back and realised we kind of needed someone to play it live, so we asked if he wanted to jump in the band and I guess eventually he just kind of weaselled his way in.”

Oh wow, so I guess the Unearthed page is very, very out of date then?
“Yeah, I didn’t even know it was still there. I mean, we’ve probably forgotten the password to even get in to edit that or taken down, so it’ll be forever there haha.”