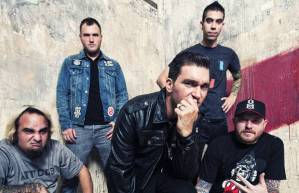 When I caught up with New Found Glory’s Steve Klein, he had just got off the road from a co-headline tour with Alkaline Trio.
“It’s really nice to enjoy some down time at home,” Klein said.
“I’m living in central California at the moment, about two hours north of LA.
“It’s a great place to live because it’s not too LA, you know, it’s easy to relax here and get away from any kind of scene.”

The band has drawn many comparisons to Blink 182 over the years, something Klein didn’t dismiss.
“We’re the same genre of music, we’ve toured with them, we had the same manager as them for a number of years,” Klein said.
“If people wanna say to their friend, ‘Oh hey, you like Blink, you should check out New Found Glory,’ then hey, that’s not a bad thing, you know?
“But I think, with seven or eight full-length albums under our belt now, we should have established ourselves as a decent band in our own right, just perhaps without as much recognition as Blink.”

Klein was a founding member of the band, alongside lead vocalist Jordan Pundik.
“He (Jordan) was a friend of mine from high school, we were both working at Red Lobster and started talking about making a band,” he said.
“Jordan and Ian had been jamming together for a while, but the whole band formation happened pretty quickly… suddenly we had a show booked in a couple of weeks and had to come up with a name for ourselves, so we brainstormed some names at work one night and came up with New Found Glory.”

The band’s original drummer, Joe Marino, “played like two shows” with the band before they recruited current drummer Cyrus Bolooki.
“Cyrus was friends with friends of ours, so it kind of all fell into place quite nicely.”

From their debut EP It’s All About The Girls, recorded in a friend’s apartment, the band’s success took off – something none of them had expected, said Klein.
“We never expected any kind of success from what we were doing,” he said.
“We were just some kids in Coral Springs, Florida, playing at dive bars and stuff, then we got a call from Drive-Thru Records saying they wanted to sign us, then we were getting a distribution deal with MCA Records, which was, you know, huge… then MTV played us, we got into the Billboard chart, then we were headlining a Warped tour, then we were supporting Green Day and then EA Games was using our tracks for video games… it was crazy, man.”

Klein said some of his surprise in the band’s success came from his earlier, ‘underground’ influences.
“I listened to a lot of ’90s alternative, emo stuff,” he said.
“Bands like Mineral, Jawbreaker, The Get Up Kids, Lifetime… bands a lot of people these days probably wouldn’t have heard of.
“I can tell you as one of the songwriters, New Found Glory is all about writing real life and putting it to music.
“Every record is like a diary of where we were at that point in time.”

The band released a live album, Kill It Live, to coincide with the American tour with Alkaline Trio.
“I guess it was just something we had to tick off the list,” Klein said.
“We’d never had a live record before, and we’ve been a band for 16 years now.
“Right now we’re in between albums, we’ll probably release something new in the next year or so, but there are three brand new songs on the live record.
“It’s all about timing for us, we like to keep our fans happy and the feedback we were getting was that they wanted something new, so… they kind of got it.
“The new tracks are a snapshot of where we’re at now and where we’re going, but the idea is to leave people wanting more.”

New Found Glory is headlining the much-anticipated Vans Warped Tour return to Australian shores, something Klein said the band was more than happy about.
“This will be the sixth or seventh time we’ll have been to Australia,” he said.
“I think we first came out there in 2001 and we’ve been every two years since – we actually did the last Warped tour as well.
“This one is going to be a lot of fun, but very different from last time… before Soundwave we all used to tour in Greyhound buses.
“Imagine us, The Mighty Might Bosstones, The Vandals, all of the bands together on a bunch of buses… that’s how different touring is now.
“I don’t think the crazy hangouts and parties will be any different, though.
“Australia is always a good time.”

Ed’s note: This story was originally published in November 2013, but taken down and re-published due to server errors. During this time, Steve Klein departed the band, citing “personal differences.”