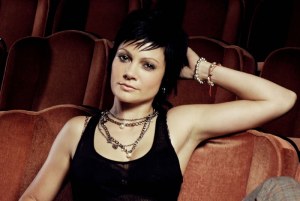 The Superjesus founder and frontwoman Sarah McLeod is back, and took time out as she prepared for some solo shows – including one in Cairns, North Queensland – to answer some burning questions Girl had to ask.

It’s been a while since you toured this far north – are you looking forward to heading back to Cairns this month?
Absolutely it’s one of the coolest places in this country, I wish I could get there more often.

You’re touring now for your latest solo EP, but is it true The Superjesus are fully reforming? Is it the original lineup? When would we expect to see new material?
Yeah we did a national tour in June with the original line up, it was amazing fun. We are working on new tracks but haven’t given ourselves any deadlines.

You have been referred to as an “iconic rock chick” – what do you think of that description, and who do you admire/look up to?
I think it’s awesome! Ha ha, I don’t know where it came from but I’ll take it. It’s weird though cause I do so many different styles besides rock. I would’ve thought my mate DeMarchi would be more aligned with that moniker. I don’t really have one particular idol, I wish I did but there’s no one human being that does it all for me, I take little bits of inspiration from everyone that’s any good. 🙂

Music wasn’t originally your chosen career path, was it? How did that change?
I went to Bali and got dragged in stage with a Balinese band. I sang and played guitar with them one night and loved my first on stage experience, it was like a drug and once I took it I never stopped.

Your sister Leah has had success in ‘the biz’ as well – how supportive were your family of your entertainment ambitions?
My mum is amazing, she is the most supportive woman ever. She would walk over hot coals to support Leah and I. Dad loves it 2 but finds it hard to comprehend what it is we actually do!

How has the music industry (particularly in Australia) changed since your initial success with The Superjesus? How has social media, for example, impacted your life as an artist?
It was a lot easier before social media. Social media is the worst thing ever invented, it cripples all the mystique but we have to do it to compete. I’m pretty shit house at it though. The Superjesus boys are even worse.

Obviously Private School Kid was a huge commercial success with Chris Cheney – is there anyone else you would like to collaborate with?
Yeah Jeff Buckley, but he’s dead.

Do you feel more creatively ‘free’ as a solo artist as opposed to working with the band?
Absolutely, I have a short attention span so I love to write in many different styles.

Where do you draw inspiration for your songwriting?
All my old LPs and documentaries on artists from the ’50s and ’60s. If it’s black and white, I’ll give it a go!

How do you write – do you tend to scribble lyrics or melodies down as they come to you, or do you prefer to sit down and write in a session?
I’m very methodical with my writing. I make a session and I sit there untill I’ve produced up the idea to a full studio quality demo. I lay down drums then guitars. I record a scratch vocal as I’m writing the words into a word document. I tweak and re-record and tweak untill I’m sure the vocal part is right. Then I lay down bass, keys if need be. Then harmonies then percussion. Once it’s complete I sleep on it, then I listen with fresh ears the next day and re-tweak until I’m even happier than the day before. It’s always the same method, it works for me. 🙂

And lastly, which of your songs and/or lyrics would best describe your life right at this moment?
In The Mood. 🙂

> Sarah McLeod will perform at Tanks Arts Centre, Cairns, on 22 November with special guest Danny Ross, finalist on The Voice 2013. Tickets are $25/$20 conc from Ticketlink.