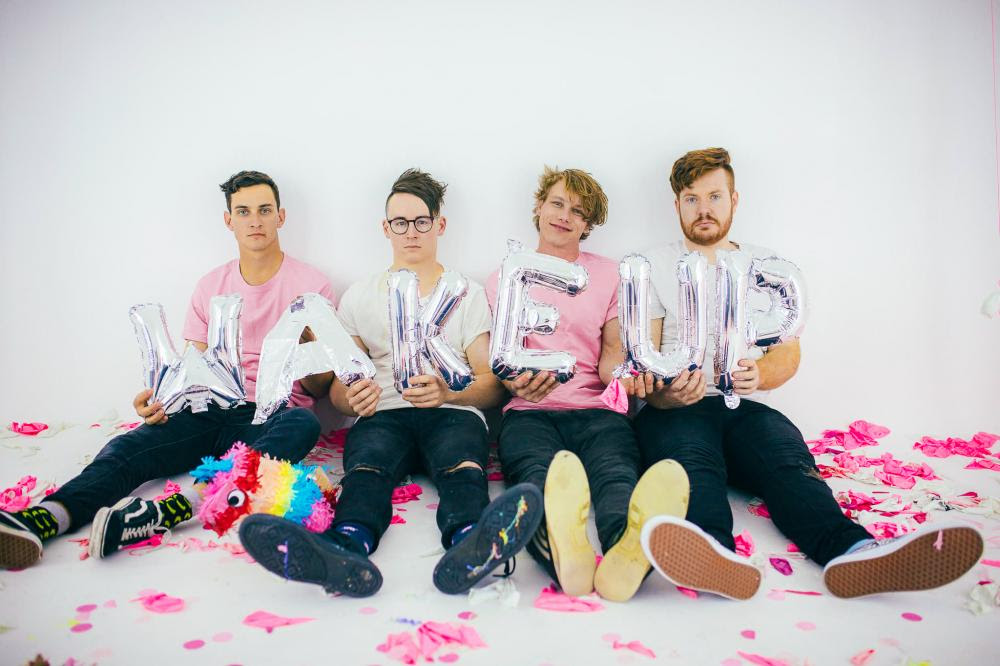 Off the back of their August/ September Marionette single tour, Perth pop-punk band Nautical Mile have just released their debut album The Only Way Is Through, and November sees them heading back on tour in support of it. This upcoming run of shows caps a busy and productive 2019 with the band making their way around the country for a third time this year!

The 13 track album The Only Way Is Through is the band’s debut album and their biggest achievement to date. But as if the album itself wasn’t enough of a treat, the band have also dropped their fourth music video.

Undoubtedly the most upbeat track on the album, Wake Up has been given a complementary video to match. The clip filmed by Dark Spirit Photography features an all-around lighthearted vibe and truly is a delight to the senses, featuring lots of pastel pinks. From a pink drum kit, to pink guitars, balloons, streamers and lots of good times. Let’s not forget the countless edible sweet treats either, with donuts, lamington cakes and whipped cream. Plus the addition of the cute pink ukulele. It screams celebration.

Lyrically the track reflects on the excitement of new relationships and the seemingly endless possibilities that arise. Guitarist Dan Ray gives us an insight behind the track and explains that “all relationships come with difficulties and troubled times, Wake Up highlights the better times that are to be cherished. We wanted to capture the essence of the early 2000’s pop-punk that we all grew up with and have some fun with the track, making it jumpy and energetic. This song is really fun to play and move to live.“

Emmett Carroll of EC Audio is responsible for producing, mixing and mastering the album. The overarching theme of the album is strength in the face of adversity and perseverance through difficult times. ‘The Only Way Is Through’ is about being able to stick at something, even when there are negative influences affecting the will to carry on, and pushing through the hurdles life can throw at you. Ray says “the tracks on the album almost represent various stages of this journey, from some of the highest highs, like Wake Up, to the lowest points, like The Only Way Is Through“.

The band will debut the album to audiences around the country in late November with a hometown show at Perth’s Amplifier Bar kicking off the tour on Friday November 22nd. Joining the band for the first show of the tour will be local punk-rock bands Ferncroft, Collider and metal-core band  Patient Sixty-Seven. The next night sees the band performing night one of two in Victoria, at Melbourne’s Whole Lotta Love. Accompanied by local Melbourne based band A New Way Home, Ballarat metal punk-rockers Anyone Anyone and South Australia’s Bearclaw Camp.  Sunday November 24 finds Nautical Mile playing at Geelong’s The Barwon Club supported once again by A New Way Home, and Bearclaw Camp with the addition of heavy alternative pop-punk band Letters To Amara from Melbourne.

The show then heads to Canberra on Wednesday November 27 at The Basement with local rockers Signs & Symbols, Sydney pop-rockers Capitol Affair and Sydney punk band This Time Only. Thursday November 28 sees the band hit Newcastle’s The Cambridge Hotel alongside local pop-punk trio Low Key Affair, Capitol Affair and Sydney rock-grunge band Halfwait. They then make their way to Sydney’s The Burdekin Hotel with Capitol Affair, This Time Only and Halfwait before closing out the tour at Brisbane’s Crowbar on Sunday December 1 aided by local Brisbane-based band Grizzlyshark, alternative rock band Bligh hailing from the Gold Coast and Halfwait.

Nautical Mile formed in late 2015 and the beginning of 2016 saw them release their first self-titled EP. Following this, in 2017 they brought their second EP Playing For Keeps to life, reinforcing their foot in the Perth pop-punk scene. 2018 saw them kick off their first Australian east coast tour in support of A Life Worth Dying For. While 2018’s single Regicide was welcomed into the world raking in over 95,000 streams on Spotify to date. 2019’s Marionette premiered exclusively on Triple J’s Short. Fast. Loud before its official release which saw it added to Spotify’s editorial playlists ‘Pop Punk’s Not Dead‘ and ‘New Punk Tracks‘. Where it was snatched up by AU Review‘ as their ‘Track Of The Day’ shortly after.

Between releases, the band’s energetic live show has led to them having shared the stage with the likes of Trophy Eyes, Hellions, Hawthorne Heights and The Decline. It also sees them with an upcoming support slot for Hands Like Houses on their 2019 Through Glass Australian Tour in Bunbury, Western Australia on November 15.

The Only Way Through is out now and is available on all digital and streaming platforms.

Tickets are now onsale for Nautical Mile’s headline tour The Only Way Is Through and can be purchased via Oztix.