How The Screaming Jets Just Keep Getting Better

One could almost be forgiven for thinking that after nearly 30 years on the road playing stages across the country, The Screaming Jets’ frontman Dave Gleeson would be over it.
Nothing could be further from the truth.

Edging ever-closer to the big 5-0, Gleeson maintains that music would be his lifeblood, even if he wasn’t on stage.
“I’d like to be remembered for gettin’ in and having an absolute crack,” the recent South Australian Hall of Fame inductee said.
“I just love rock. I love to rock out with people, I love to be on stage with my band, love to be on stage with other bands, if I’m not on stage then I love just bangin’ me head to the music so yeah I guess, I’d just want everyone to know that I wasn’t ever putting it on, that I absolutely love it. If I wasn’t on stage then I’d be in the crowd.”

The singer – who has pulled double-duty fronting fellow Aus rock legends The Angels for about five years now – admitted touring is easier now than it was in the Jets’ early days.
“You’re not away for six and seven weeks at a time, so that means your clothes are much cleaner ‘cause now I get to come home and wash me clothes, whereas back in the day I didn’t wash me clothes a whole lot… we were all filthy rock n rollers, we’d wear ‘em til they rotted off us,” he laughed.

“Obviously because we’ve toured so much and met so many people around the country every time you get into town in the afternoon people send you a message asking if you wanna hook up for a beer, and the answer is yes I do, but the true answer is no I can’t, you know. So that’s kind of the main thing, make sure you get the gig out of the way first then have a party.”

So does being older and more responsible mean the nights are getting shorter?
“Ohh… (laughs) I’d have to say no,” he said.
“We actually played in Adelaide which is my home town nowadays a couple of weeks ago and my wife came along and we got home at 5.30 so ah, the babysitter was well chuffed with that (laughs) but at least I was out with me partner in crime, being me wife, so yeah you still have the late nights just not as many of ‘em.”

The Jets have been busy touring the country with The Baby Animals, playing six weeks of sell-out shows right around Australia. Gleeson said the “slice of ‘90s pub rock” had been well-received by fans, and it was great to tour with old friends once more.
“When we (The Jets) first moved to Sydney we played a residency together for about 10 weeks at a place called Max’s at Petersham on a Sunday arvo,” he said.
“So we became really good mates, then we went on a national tour together and then of course we both kinda went on our way around the world.
“We all used to hang out at a place after gigs called Springfield’s in Kings Cross so now we mostly talk about things that happened there (laughs).”

Unbeknownst to many younger music fans, The Screaming Jets were one of the early pioneers of the national band competitions which brought us the likes of Killing Heidi and Grinspoon.
“There was a band competition called the Hoadley’s Battle of the Sounds,” Gleeson said.

At one stage?
“Yeah, yeah, then something went wrong,” he laughed.

A band competition and national radio coverage may have certainly helped ‘break’ The Screaming Jets, but the guys have never been strangers to hard work and dedication, and their hugely successful back catalogue – with hits such as Better, Shivers, Helping Hand and I Need Your Love – is further proof of that.

Gleeson said for bands trying to break into the market in the days of the internet, it was in some ways easier and in a lot of ways harder.
“Well it’s kind of harder now because you can get the exposure and kind of still get lost in the mix,” he said.
“Because there’s so many streams to come into stuff, you know, you’ve got your YouTube sensation, you can be someone that everyone finds on Facebook or Twitter or whatever. But back in the day you had to get all your ducks in a row, meaning that you had to spend a lot of time rehearsing. Not everything you wrote was going to be gold. You had to go through the times where you wrote crap songs so that you’d get to the good songs. You had a little more time behind the scenes to get a repertoire together and stuff like that.

“Now? You might have a song that’s catchy and interesting, like those guys on the treadmills that no-one remembers, and you’ve got a video to go with it and 10 million people around the world go, ‘this is amazing,’ and still your name is unknown and that doesn’t mean that you’re going to lead to more success with your next … It’s a bit of a hard one now because everyone’s in control of what content they put on the internet, and often times you’ll see things go viral or whatever, but these people have no concept of how to manage that type of fame or how to parley that into more success. So it’s the time of the one-hit wonder, but that one hit can get you 30 million views on YouTube (laughs) it’s a very strange time.”

Despite the years of practice, Gleeson admits he hasn’t got all the answers when it comes to song writing.
“I guess it’s always developing… If you could get it down to a perfect formula I guess you’d be having hits all the time,” he laughed.
“I mean it’s certainly a really enjoyable experience because we all come at it from different angles. Paul Woseen our bass player, he tends to write a lot on his own and come in with fully completed songs, and we’ll collaborate on some other songs, myself and a couple of the other guys collaborated on some songs together. So yeah, it’s a fun process because I guess there is no real method to the madness, they just kind of take shape in their own way.”

While the Grinspoons and Killing Heidis of the world are currently touring the country celebrating 20 years, the Jets will soon be celebrating three decades as a band – a feat Gleeson said would not go unrecognised.
“We’re working on ideas now actually,” he said.
“I want to get a book together, a coffee table book about coffee tables… (laughs) nah, about The Screaming Jets, we’ve all got so many photos over the years, on the road, in the studio, mucking on. Just give people an overall view of the history of the band, those that have come and gone through the band, that’s the sort of thing I really want to put a lot of time into.
“Obviously we’ll be putting together a 30-year compilation of some of our bigger hits and some of our lesser-known songs, the old album tracks. And I guess we’ll be promoting a new album at that stage as well to show that we’re still havin’ a crack even after all these years.”

And what is Gleeson’s secret to success and longevity in the music industry?
“Just to enjoy it,” he said.
“There’s times where you can get stuck with your head right up your own bum thinking, ‘oh this is so hard,’ and, ‘everyone wants a piece of me,’ and, ‘can’t people just leave me alone,’ and all that stuff but in the end it’s a damn fun thing to do, to hang out with a bunch of your mates, tour around the country, play gigs, play songs, get paid, and have a lot of spare time to do stuff like looking after me kids and time to be a good dad and husband and all that stuff.
“Once you get on top of all that other self-indulgent bullshit you just realise how lucky you are (laughs) and what a great career path it is. As you say, 30 years, man I didn’t think at the age of 18 or 19 I’d still be out there rockin’ out to full houses but there you go.”

Gleeson laughed uproariously when reminded of a time during the band’s show in Townsville around 10 years ago, where he smacked his face with the microphone and bled profusely for the remainder of the song (pictured).
“Ahhh it used to be (fairly common), but I started getting in trouble, me daughter hates me coming home with scars or marks on me head,” he said.
“What happens is, with these things, you do ‘em one night and once you realise it gets a bit of a reaction you sometimes carry that on a bit. But I stole that one off Angry (Anderson). Angry used to rub his head along the front of Pete Wells’ quad box to make blood come out, it’s a pretty easy place to get blood out, your forehead, so it’s good for effect (laughs).” 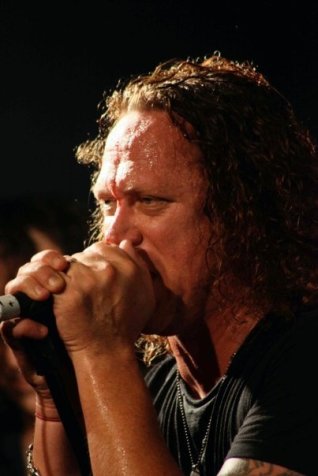 The band has spent the best part of the last year on the road promoting their latest album, Chrome, whilst trying to write songs for the new album, which Gleeson said they hope to record at the end of this tour.
“(We’ll get into the studio) probably around the September period?,” he said.
“Get in at least and do some demoing… it becomes a bit of a process but usually you find that first thing of getting in with a bunch of songs and demoing them all, that’s the catalyst for everyone to get their arse into gear.”

It seems there is no slowing down for this legendary rocker.
“So the Jets finish (the tour) in August and we’ve got a bit of time off and as I was saying we’ll do a bit of recording, and then October through to December I tour with The Angels, and then January and February I’m doing the Red Hot Summer Tour, and that’ll have Suzi Quatro, The Angels, The Baby Animals and The Screaming Jets on it,” he said.

So you’ll be pulling double-duty on that tour?
Gleeson laughed, “I’ll be testing myself then, I better get a bit of fitness into me before that comes along!”

As far as touring goes, Gleeson said his philosophy was the same regardless of whether he was playing a tiny town in outback Queensland, or a sold-out 170 Russell in Melbourne.
“Obviously in regional places people probably are a little tougher than metropolitan areas, but we’re just trying to get out there and make everyone forget their cares and woes and have a great rock n roll time, and that doesn’t matter where we are, in the bush or in the city,” he said.

“I think we try as hard as we can to work hard enough that we get full houses everywhere we play and our ethos is, ‘it’s not the size of the crowd at the gig, it’s the size of the gig in the crowd,’ and that’s how we go every night.” 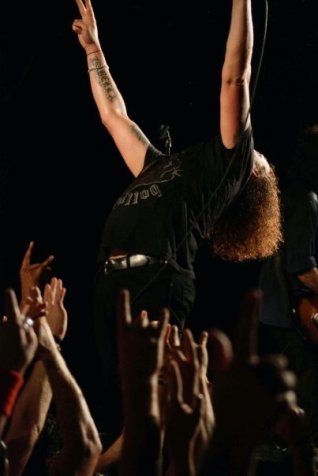 Catch The Screaming Jets at one of their upcoming shows: