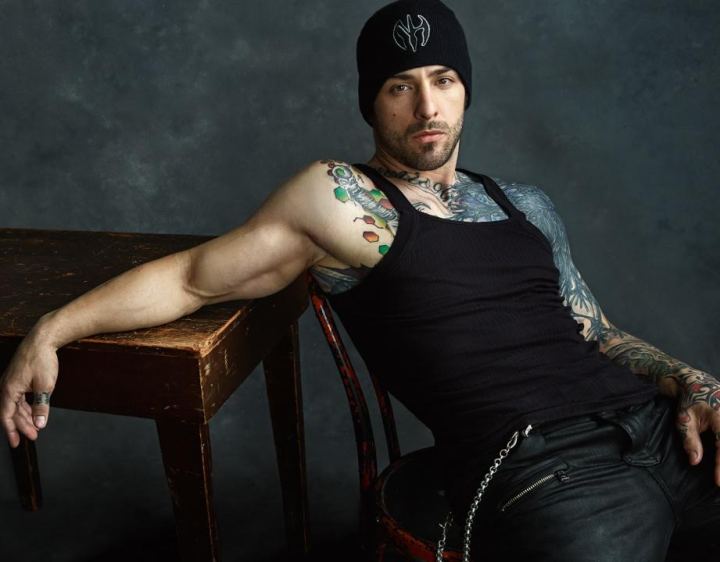 The term ‘gigolo’ is oft-met with a raised eyebrow, maybe a snort (for those that remember 1999’s Rob Schneider film, Deuce Bigalow) and a hint of wonder… what really goes on in that world?

Wonder no more, ladies and gents! Girl recently caught up with one of the stars of the American adult reality series Gigolos – actor, model, musician, entrepreneur and all-round hottie Nick Hawk – to get the – ahem – hard facts.

So Nick – at what point did you decide to get into the adult entertainment industry, and why?
“When I had the opportunity to star in an original Showtime series called ‘Gigolos‘. I was a stripper on the side when I was studying and perfecting my acting craft but didn’t have big plans of joining the ‘adult entertainment industry’. I wanted to be a legit actor, but it was an opportunity I couldn’t pass up and I had some great ideas on how to capitalize. I knew if we weren’t successful, my chances of having a successful acting career would be slim because of Gigolos being an adult and reality show.”

How has being on Gigolos helped or hindered your career? Do you worry now about being taken seriously as an actor or musician because of it?
“It’s helped in some ways and hurt in others. It doesn’t matter though; I made my bed and I sleep great. I’m thankful for how it has helped. I was worried about being taken seriously but not so much any more, especially since we’ve done six seasons. We’re part of something bigger than just an ‘adult-reality’ show now. What we do has become more acceptable now that people understand it better. We made the decision to have fun with it and I think we’re pretty damn entertaining to top it off. The show has become an adult comedy more than anything. The first couple seasons people didn’t know what’s up, but now they do.”

It sounds like you had a pretty normal, family-oriented upbringing – so what does your family think of your adult industry work? Especially baring it all (literally) on Gigolos?
“I’m actually on a plane right now heading home to Wisconsin for the first time in years and the last time was for a performance. My mom’s my ‘biggest fan’, which is kind of weird, and the rest of my family thinks it’s pretty cool. They definitely support my music, drive and message more than me taking off my clothes on TV. But it also becomes more and more acceptable the bigger we get and every season that airs.”

You’ve also done some other acting, and have a music career, and a sex toy line – what are you most passionate about?
“Right now, I’m focusing on my music; it’s hard to have an acting career living outside of Los Angeles. I live in Las Vegas. I’m now able to, not only write my music and rap or sing it, but also develop and produce my beats with my piano, drums, and music programs from home. I brought on new PR, Luck Media, that’s helping me kick some ass too. I’m doing a huge push, have a bunch of performances lined up, recently made Music Connection’s Hot 100 Unsigned Artists list and have more music in the works. I’ve recently added a rock element and may be touring with a band.”

What really gets you out of bed in the morning?
“I don’t see too many mornings. I’m a nighthawk. I usually wake up around 11 or noon and take some business calls for my company, ExplicitStrippers.com, before I get moving. I train in the evening. I’m usually up late with clients and my brain works better at night. I have better focus and I’m more creative. I also understand how detrimental not getting enough sleep can be. You’re killing yourself and not operating at your full potential. I’m grateful for life, everything it offers and all the opportunities it brings us. I never waste any of the few days I have here.”

I can imagine you’ve been in some pretty sticky situations (pun intended) – what’s been your most awkward or embarrassing moment so far?
“Embarrassment is perspective. It’s something I don’t feel anymore. I definitely have situations where I may ‘take one for the team’ on my show (Gigolos) but it’s all for the greater good. I’m okay with someone laughing at something I do. I’m just grateful I can bring some laughter to a world that needs more of it. I hate the word ‘awkward’. It’s a situation you encounter where you don’t know how to act. I don’t encounter any of those anymore either. And the word translates to ‘graceless’ more than it does ‘uncomfortable’, for which we use it. All of this just has to do with learning who you are, accepting yourself and being confident. Get my book when I release it to learn more!”

How true to life is the stuff we see on Gigolos?
“I don’t like watching the show and it’s hard for me to do so. It’s me, but a piece of me. We film hours for second. Someone else is editing and portraying me as they see fit and remember we’re in front of those cameras to put on a show. We’re all exaggerating our characters and letting it all hang out.”

Every time I see you, you seem to have more ink. What’s the significance of your body art? And exactly how far do your tattoos go… if you know what I mean?
“My cock is tattooed, if that’s what you’re asking. Get a Skype and find out what’s on it. 😉 I’m going for a ‘yin-yang’ type look. I want half of my body done and I think I’m at about 40%. The art definitely tells a story and I have a lot of motivational reminders and reminders on me of who the fuck I am. It’s easy to forget and get lost in life. I just got an amazing tattoo of a microphone cable being plugged into my neck.”

Guiltiest pleasures?
“I don’t do anything I feel ‘guilty’ about anymore.”

What are you working on right now?
“My new track, ‘Breakin’ A Sweat’ and a second music video to my last track ‘We Fight’. I put my book on hold for this music push but I’ll get it out as soon as I can. I’m shopping around two new TV show sizzles I star in, one about the expansion on my company ExplicitStrippers.com, and I’m also in talks with Brace, my co-star on Gigolos, to do another show about us possibly travelling around the world and getting into trouble.”

Any plans to come to Australia any time in the future? Have you been out this way yet?
“I have a client who lives there and I’m hoping she gets sick of coming to Las Vegas and flies me out. I’d love to go – it’s definitely on my bucket list.”

(Bonus fan question) Biggest turn-ons and turn-offs?
“Sexiness, style and success are my turn-ons; negativity and laziness are my turnoffs.”

(Bonus fan question) Are you single right now?
“I haven’t been in a committed relationship in over six years.”

Check out the music video for We Fight:
https://youtu.be/Bqn8ibObbow