Australian writer Clementine Ford has become a bit of an internet sensation this week after posting the following message for morning current affairs show Sunrise regarding their “What’s it going to take for women to get the message about taking and sending nude photos?” Facebook post: 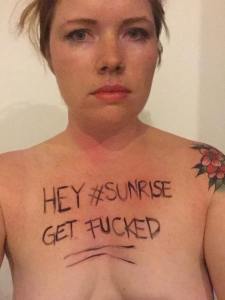 Ironically, Ford was then inundated with requests for nude photos from an array of complete strangers, ranging from polite (“Can I have some nudes please”) to demanding (“Send me nudes”) plus some unsolicited dick pics; many of which she took screenshots of and posted on her Facebook page.

Facebook then tried to give Ford a 30-day ban for violating their community standards by naming and shaming these classy specimens; a decision which was later overturned after backlash for ‘gagging’ women for speaking out about sexual harassment.

Ford posted the following statement on the issue:

“I’m thrilled that common sense has prevailed and that I have had some kind of victory here. But it still stands that such a ban should never have happened in the first place. No one should be punished for speaking out against abuse, especially not the kind of cowardly abuse sent under the banner of ‘private correspondence’. Private correspondence is a conversation mutually entered into by more than one party and defined by respect and sometimes discretion. It is not someone sending you unsolicited emails calling you a filthy whore and sending you unasked for pictures of their dick. To argue otherwise is the same as suggesting that flashers or tram masturbators are owed some kind of respect and privacy.

No. You do not have the right to have your violent hate speech kept secret from the world because you either lacked the courage to own it publicly or because you not so secretly get off on humiliating and degrading women in a way that relies on their isolation.

I’m grateful to everyone who has offered me support and solidarity, not just in this matter but in every situation where I have, for better or worse, put my head above the parapet to try and fight back against ingrained sexism. I literally could not do this without you.

But it should not be forgotten that the vast majority of abuse targets do not have the same level of resources that public writers and people with large Twitter followings have at their disposal. After FB banned me for having the audacity to publish photographs of the onslaught of sexualised abuse being sent my way, I was able to mobilise an army of passionate, enraged people. I do not take lightly the fact that I have more privilege than many others when it comes to these issues. Many who are punished do not have that kind of support.

This is a win for me, but I hope it sets a precedent for all future victims of online FB harassment and becomes a win for all users who have done nothing wrong except stand against injustice and hate. When we speak out, we are not just raising voices – we’re raising courage. That’s the most important weapon we have, and it’s the one we can’t ever afford to lose.”

With her Facebook account reinstated, Ford posted yet another shining example of support for women earlier today:

When will Australia stop this attitude of victim blaming? When will we stop shaming and attacking those standing up for their rights? When will men, women, transgenders, asexuals or gender fluid folk be able to use the internet without facing the online equivalent of the dirty perv at the train station? When will people realise that although they’re only typing words on a keyboard, there’s a real person with real feelings reading these words on their screen?