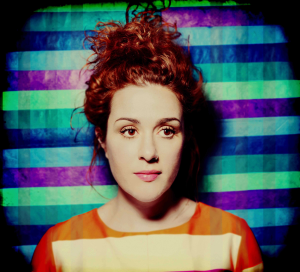 I caught up with Brisbane song siren Katie Noonan for a quick Q&A ahead of her performance at Townsville Cultural Fest this weekend.

You’ve come from an extremely gifted family – what was your upbringing like?
My upbringing was a combination of two obsessions – music and literature. My mum is an opera singer and taught music from home and my dad was a journalist (and also a jazz singer in the day), so it was a very creative hive of activity. I was also lucky to have a cool older brother who introduced me to lots of really great music from a young age.

You have worked on a lot of creative projects – George, Elixir, Blackbird, Love-Song-Circus – is there one you’re particularly fond or proud of?
I am really proud of all my projects for different reasons! I guess Love-Song-Circus is particularly special as it was a large scale multi artform production that I produced myself, so it was quite an undertaking! I feel we created a very unique and special work. I love all my bands for different reasons and instinctually I just return to them when it feels right. At the moment I am concentrating on a solo album for next year I think, along with continuing to write with my Elixir band mates and Michael Leunig in our collaboration album ‘Alchemy’.

Songbook re-examines your own back catalogue… have you learnt anything about yourself in the process?
Absolutely – songwriting is free therapy! It was really interesting revisiting some of my old songs and seeing how they had changed meaning for me now at this stage of my life. Some songs I had well and truly moved on from and didn’t feel I could perform again with real conviction, and then others it was like rediscovering an old friend! It was beautiful to strip them back to just myself on the piano and the string quartet. The string quartet play particularly beautifully and Steve Newcomb’s incredible string arrangements also brought the songs to life in a new, lush way.

You joined Abby (Dobson), Martha (Marlow) and Angie (Hart) last year for the Songs That Made Me shows – could you share one of your fave songs/stories?
Well I told Angie that I used fake ID for the very first time to sneak into her gig at Transformers Brisbane in about 1993 😉 She was also one of the reasons I got a nose ring – I thought hers looked rad! Abby’s story about the reasons behind Even When I’m Sleeping was totally gorgeous and Martha was so lovely to be around – she’s at a different stage of life – she turned 19 on the tour – the same year Marvin the Album came out! She is a true talent to watch. The Songs That Made Me concept was mine and I intend to make it an annual all female event!

Having worked with some of the biggest names in Australian contemporary music – including your own mother – what’s the most valuable thing you’ve learned about the industry?
To work as hard as you can to improve your craft and be as unique as possible. Also to treat people with respect and gratitude because after all, our job, although it had it’s downsides, is pretty darn awesome!

You spend a considerable amount of time working with young people and aspiring musicians – what makes you so passionate about it?
I strongly believe in the importance of music education for children from all walks of life. It is proven to vastly improve their learning and their social skills. Music is awesome in so many ways, and young people are our future and so I want to help inspire and foster their love of music so that they can be the best they can in whatever they do.
On this trip to Townsville, I will be mentoring young music students from Heatley Secondary College for two days and I am sure it will be inspiring!

What’s the best advice you could impart to someone starting out in the music biz, particularly coming from outside Sydney or Melbourne?
Not being from Sydney or Melbourne is a blessing. It means you have more time to hone your craft and form your own unique sound away from the spotlight. Remember you never get a second chance to make a first impression.
Some of my favourite artists of the last few years have not been from Sydney or Melbourne! The Medics, The Middle East, Emma Louise, Whitley, Thelma Plum, Airling, Kira Piru, etc… Just be prepared to travel to those cities regularly but keep on coming home to paradise!

You were voted one of the 20 Greatest Australian Singers of all time in a Herald Sun poll last year (alongside Michael Hutchence, Bon Scott, The Bee Gees, Neil Finn and Gurrumul) – how do you react to that kind of honour?
I was totally blown away. It was an incredible honour to have people I have grown up admiring (Iva Davies, Kate Ceberano, etc) saying such nice things about me! What I love most about a voice is that it is unique. It doesn’t have to be perfect, just not sound like anyone else (Bjork, Tom Waites, Joan Sutherland, etc)…. It’s easy to be an imitator but it’s not so easy to make your own sound so that has always been my inspiration and motivation.

You’ve most recently been doing a series of intimate shows, and now coming to Townsville to perform at a large-scale festival – do you find it difficult to switch it up?
No I love switching it up! All gigs have something to teach you – whether the audience is a meter away or 100 meters away. It is simply about sharing and creating a sense of belonging and you can do that anywhere!
Hopefully just me and my keyboard won’t be too little for the festival stage!!! 😉

Your husband Zac is also an extremely talented musician – are your boys keen on following Mum and Dad’s footsteps?
Our boys are deeply creative. We have brought them up without TV or computer games and I think that has really encouraged their creative spirits. At this stage Dexter says he wants to be a visual artist and a stunt motorcyclist (God I hope he gets over that one!) and Jonah wants to be a drummer and an actor. Who knows they may rebel and become tax accountants to buck the trend!
Whatever they do, like any parents, I just want them to be happy and fulfilled in anyway (as long as it’s legal and not too dangerous!).

Catch Katie Noonan live for one night only at the Townsville Cultural Fest at Jezzine Barracks on Saturday night. For more information and playing times visit the official Cultural Fest web site.