There’s no greater indication of the power of music and television than the diversity of the crowd at a Ricky Martin show.
Men and women aged six to 96 packed the Townsville Entertainment Centre for two nights to witness what can only be described as a spectacle, as The Voice Australia coaches Delta Goodrem and Ricky Martin took to the stage.
Delta proved her prowess to the growing crowd early in the evening, belting through some of her greatest hits including Lost Without You, Sitting On Top Of The World and Born To Try.
Martin wowed the crowd with multiple costume changes, hip swivels to put even Elvis to shame and that endearing personality we see on TV.
Oh… and we can’t forget throwing a mention to his band and backup dancers. I have literally never seen so many buff young men playing brass instruments and – without showing my age – a bona fide keytar.
Kudos to the wardrobe designers for this show, too – whoever had the idea of putting the guys in leather kilts without shirts should win a medal or something. Pretty sure my thigh still bears scars from my friend’s fingernails when they came onto the stage.
Wait… this is about the music, right? Not a Magic Mike-esque male appreciation post.
Well… the music was phenomenal. All the hits were there – She Bangs, Livin La Vida Loca, Disparo al Corazón, Maria, Cup of Life – and literally had the crowd on their feet and dancing.
What surprised me was the amount of choreography Martin does for the show – and seriously, haters gonna hate (hate, hate) and whatever, but until you can complete a two-hour Zumba class and sing note for note without missing a beat (or being ridiculously out of breath and red in the face) don’t talk smack about Ricky Martin. He’s essentially doing that, every night, for however many weeks, in his mid-40s. I wanna give the guy a high five because that takes skill.
So… hot band, hot dancers, awesome music, Zumba moves – altogether an awesome night. Well, two nights technically, since Martin’s show was moved from the footy stadium to the entertainment centre and a second show added, and yours truly got to see both. They were both pretty flawless (and sold out) bar one incident with Goodrem’s mic not staying put at the piano on the Friday.
Oh, and there was a car. Like, a full American muscle car. On the stage. That they danced on. I can’t show you the photos as we could only shoot the first two songs but trust me, it was amazing.
Rumour has it the rest of the tour sees Martin flying, P!nk style, over the audience, but unfortunately Townsville missed out on that side of things due to ceiling heights and things. Technicalities, it would have been amazing but this was still one of the biggest productions Townsville has seen.
Two very enthusiastic thumbs up. 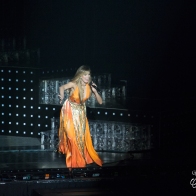 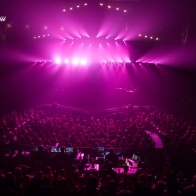 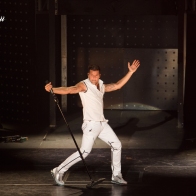